"Tiger 1 Eastern Front" is the second kit from Rye Field Model. It has an interior, making it the third Early Tiger kit to provide comprehensive internals (the previous ones were Academy's "Tiger-I Early" and MFH's "Tiger I Early Production"). In terms of accuracy Rye Field comes second to MFH, and is far ahead of Academy.

The interior parts fill the entire model.The turret can be separated from the hull and all hatches can be posed open, but there is no special provision for display of the interior. Engine, gearbox, gun, seats, fuel tanks, radiators, flooring, suspension, storage boxes and more are provided. A full load of ammunition is included. There are no crew figures. The proportions and general "look" of the parts are very good. Small details, like electrical wiring and oil leads, are not included.

It appears that Rye Field Model did not visit a real Tiger while preparing this model; it has a few errors that could only result from misinterpreting photos. It also seems that the kit's designers ran out of time or budget, and omitted a number of parts; the kit has holes and connections where parts were obviously intended to go. The missing parts are mostly located at the back of the tank, just inside the rear wall: they are the water pipes, the exhaust connections, the snorkel, the drive shafts and clutches for the fans, and the cover plates for the fans. The crew compartment lacks a few items including a fire extinguisher, connecting shafts and levers, small boxes and the turret locking device. While it's feasible to scratchbuild the missing items in the crew compartment, the engine room is not easily correctable. The underside of the engine hatch is missing 10 latches. 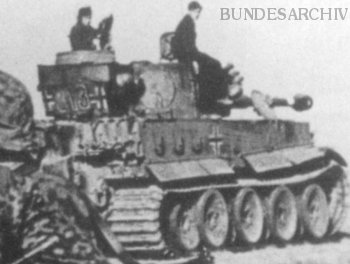 This kit's name, "s.Pz.Abt.503 Eastern Front 1943", is not specific enough. The 503 battalion operated a wide variety of Tiger types on the Eastern Front in 1943. This kit represents only the nine Tigers with the special turret bins. No other manufacturer has yet represented these Tigers with a plastic kit. Rye Field Model provides decals for four of these nine Tigers, plus a later-model Tiger that acquired one of the special turrets.

These Tigers were originally numbered "2xx". When transferred to s.Pz.Abt.503, the Tigers were renumbered "3xx". Their original dark grey finish was repainted in camouflage colours when the weather warmed up; we have no record of what these colours were. Later, the crews added hull storage boxes to some of the tanks and painted crosses on the turret bins and sides. They participated in the Kursk offensive and were active for the rest of 1943.

The external fittings of the kit are typical of the period when these Tigers were built (December 1942). But, like Rye Field's previous Tiger kit, this one does not specify the exact features of the specific Tigers whose decals are included. In fact, the features that the instructions specify (standard-type side skirting and no S-mine equipment) did not exist on any Tiger. Only by moving some items and using spare parts can you build a specific Tiger accurately.