The Tiger had a water-cooled engine, but it also used air cooling to take heat away from the exhausts. The air was driven by a fan at the front of the engine, it ran along the exhaust pipes, and it was vented into the main air outlets at the back. 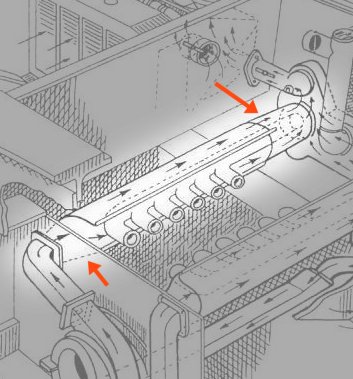 This German sketch shows the general arrangement, with the engine removed. There is an exhaust pipe at each side of the engine position. An air duct surrounds it. The duct is connected to the fan at the lower left of the sketch, and is also connected to a collector and an outlet pipe on the rear wall of the tank.

This is the same area in the Rye Field Model Tiger, with the engine installed. Rye Field's engine has the duct surrounding the exhaust pipe, but the connections specific to the Tiger are missing. At the left of the diagram, there is no input connection from the fan duct in the crew compartment. At the right of the diagram, there is no output connection to the collector on the rear wall.