In December 1942, the side skirts of the Tiger were redesigned. The length, shape and disposition of the skirts were all changed. It is immediately obvious whether a given Tiger has the old or the new type of skirting. 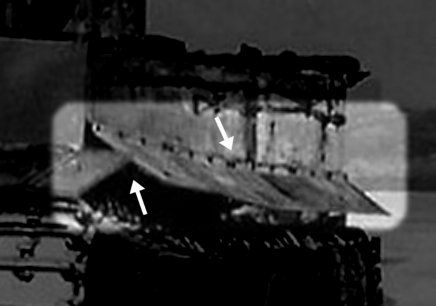 This photograph shows the earlier type of skirt. The skirts have no end panels and the bolts attaching them to the tank are not laid out exactly in a straight line; there is a visible bend. Also, although it is not obvious in this photo, the rear two segments of skirting are about 25% longer than the front two.

Rye Field Model's kit 5003 provides only the later type of skirt. This type has end panels at front and back, and the fixing bolts are laid out in a straight line. All 4 segments are the same length.