"Tiger 1 Tunisian Initial" is one of many Tiger kits from Dragon. It addresses the same subject as the 2005 limited edition "Tiger 1 Tunisia" from Cyber Hobby, i.e. the tanks of the 501st Heavy Tank Battalion in Tunisia.

The 501st battalion had 20 Tigers. The layout of the cables on the top deck of Tigers was changed significantly while the 501st was being equipped; this kit addresses only Tigers with the earlier layout, all of them in the 1st Company.

The 501st heavy tank battalion was the second unit to be equipped with Tiger tanks. Its Tigers had prototype external fittings, giving them a unique appearance. The battalion was sent to General von Arnim's 5th Panzer Army in Tunisia, starting its deployment there in November 1942.

At that time, American and British forces had landed to the west of the Axis zone while Rommel's Afrika Korps was fighting to the east. The 5th Panzer Army was urgently shipped to Tunisia to defend against this new threat. The 501st was given all new Tigers as a priority until they had 20, organised into 2 companies. At that time, Tiger battalions mixed Tigers with equal numbers of the smaller, more agile Pz.3.

The 501st fought in several battles between December 1942 and March 1943. Its Tigers were the first ones ever encountered by British or American forces, at the battle of Tebourba. Of particular note is the battle of Sidi bou Zid where heavy losses were inflicted on American armour. However, General von Arnim refused to lend the Tigers to Rommel for his subsequent assault through the Kasserine Pass.

At the end of February 1943, the 501st was attached to the 7th Panzer Regiment and sent on von Arnim's ill-planned mission to capture Beja. The mission ended with seven Tigers lost in the battle of Hunt's Gap. The eleven remaining Tigers were attached to the newly arrived 504th Heavy Tank Battalion and continued fighting until the surrender of Tunisia.

This kit is not a simple re-release of the earlier Cyber Hobby kit. It includes parts that were developed for other kits in the 10 years since, and has new parts of its own. One-piece tracks made of DS plastic are supplied. The side mudguards are supplied in 4 segments each, allowing them to have the slight misalignments that were typical of these Tigers. Eight new-tooled roadwheels reproduce the "thick rim" type of wheel from the beginning of Tiger history. This is the only kit that correctly represents the wide turret bin and the small-diameter tow cable of these Tigers. 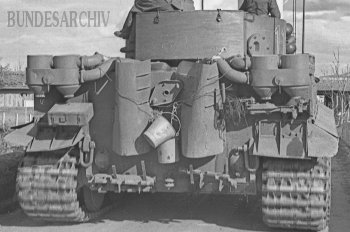