The Tiger's engine, in the tank's original design, drew its combustion air through openings on the engine compartment hatch. The engine's integral air filters were deemed inadequate for dusty conditions. Starting with the Tigers sent to Tunisia, external air precleaners were provided with all new Tigers, though in many cases the crews did not use them. The precleaner system was called "Feifel".

This photo shows one of the two Feifel filters of a Tiger (in Bovington Museum). The small cap on a chain is not original, but a restoration. This unit has battle damage dating from 1943.

This diagram shows a Feifel filter unit as originally designed. The units were attached to the rear armour wall by 4 bolts.

To use the Feifel system, you would close down the large round cover of the air intake in the middle of the engine hatch [3] . The engine would then draw in air through a slot in the hatch, to which you would connect a V-duct and two trunks leading to the Feifel filter units. They, in turn, would draw air from the central area of the engine deck, via two more trunks.

The reason why the V-duct was placed at the front of the engine hatch, instead of the rear, was that the Henschel designers originally wanted to continue the ducting inside the engine compartment to connect directly to the engine, whose air intake was at its front end. But this internal Feifel duct was never produced. 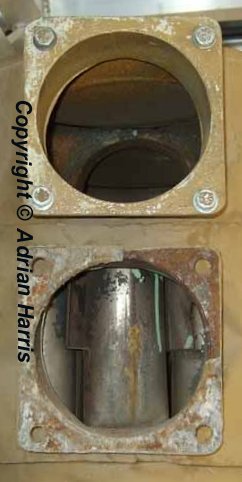 Here we can see into a Feifel filter unit. Internal partitions divide it into two linked upper chambers, a middle chamber, and two separate conical bins underneath. The middle chamber contains 20 vertical tubes; these are cyclonic filters. 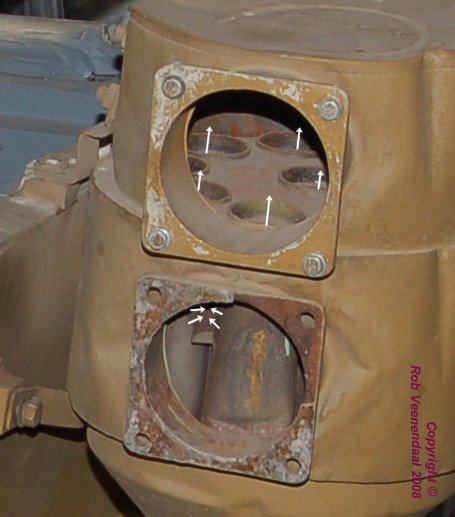 Dusty air enters each filter through a duct on its upper side, as shown by the arrows. The shape of that duct induces the cyclone (rotation of the air) within the tube. Cleaned air emerges from the tops of the tubes. 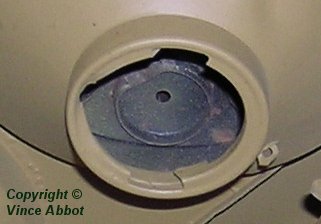 This is a view from below. There was a cap on the bin, attached by a chain, but it is missing from this museum unit. The three caps were used to drain the unit of water after submersion of the Tiger.

We can see the bottom of a filter tube, and a small hole in its center; the extracted dust falls out of this hole. Cyclonic filters usually have a tapered lower segment. These ones appear to be cylinders, but I suspect that a conical segment is hidden within each tube, otherwise I don't see how the dust could all be guided to this hole. 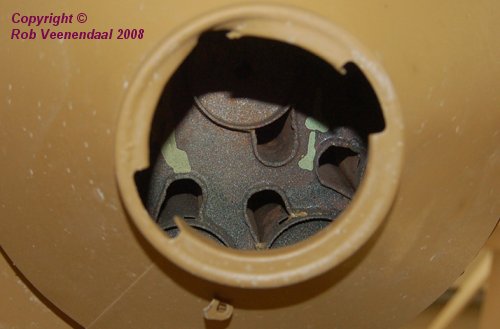 There is another as yet unanswered question regarding these cyclonic filters. Each one has a duct at the bottom, as you can see here. The shape of these ducts suggests to me that they inject secondary air into the tube, above the conical segment. This is a standard technique to prevent erosion of the filter walls. Unfortunately I have never seen the upper end of these ducts and their presumed connection to the inside of the tube. The tiny rectangular hole at the bottom is probably for draining water. 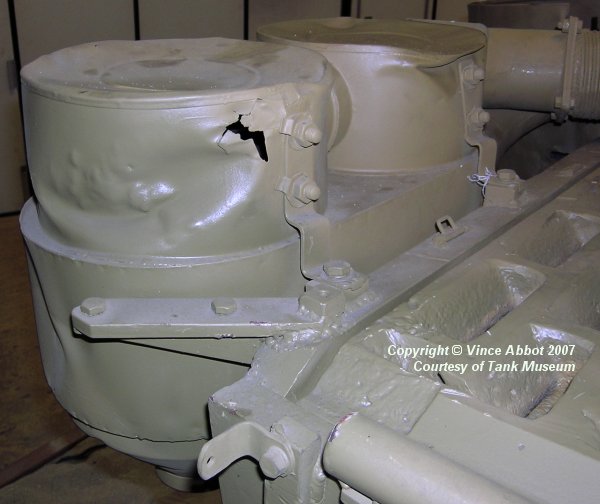 Here we can see how the units were attached to the hull wall. (The long support arm in the foreground is from the S-mine system.)

The design of the Feifel units was simplified in March 1943. This diagram shows the new design; no surviving examples are known. There was now a single upper compartment. Given that the middle compartment had the same height as before, the cyclone filters were probably unchanged.

The precleaner system was dropped completely from production in October 1943. The welded mounting points on the hull rear plate were still provided on new Tigers for about three more months [3] . This diagram shows the mounting points.