Tiger "121" of s.Pz.Abt.504 is left by the side of a road north of Tunis, at the end of the African campaign. It seems to have been knocked out here, or perhaps used for target practice; there are two impacts on the mantlet (detaching the gun sleeve) and three penetrations on the right side.

Because this road was the main Bizerte-Tunis route, many photographs of this wreck were taken, as well as newsreel film. The tank was examined by Winston Churchill. 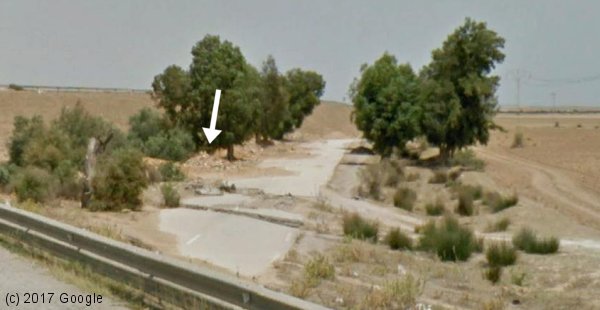 In modern times, most of this road has been destroyed by new construction, but a short stretch of it remains and it is beside this stretch that Tiger 121 was left. The arrow in this photo indicates the approximate spot.

The location was deduced by finding the spot on the road where these hilltops match a 1943 photo. Then, a surviving farm building that appears in another photo gave a more precise fix.