A single Tiger(P) saw service on the Eastern Front. Although not a Tiger(H), it had a similar turret, which makes it relevant here.

Information about this specific tank, tactical number "003", is limited. The Tiger(P) is poorly documented, and the unit that operated this tank made changes to it that are recorded only in photographs. A set of drawings was published in "Panzer Tracts" [2, see see 6-27] but they disagree with the photographic record. I hope to explain some of the discrepancies.

Origin of the tank

Ten complete examples of the Tiger(P) were made. The first eight had an unusual turret roof with a central ridge. The final two had a later version of the turret, with dimensions matching the Tiger(H). [2, see see 6-26] These variants of the tank were referred to as Tiger(P1) and Tiger(P2). [1] Our subject "003" is a Tiger(P2).

The drawings in "Panzer Tracts" depict "003" with two pistol ports, but this photograph [3, see page 374] establishes that it had a turret side hatch. (In the photo, the hatch is open and is seen edge-on.) This feature was introduced to Tiger(H) production at the end of 1942 so it is not surprising to find it in one of the final Tiger(P) turrets, although no mention of it has been found in documents. 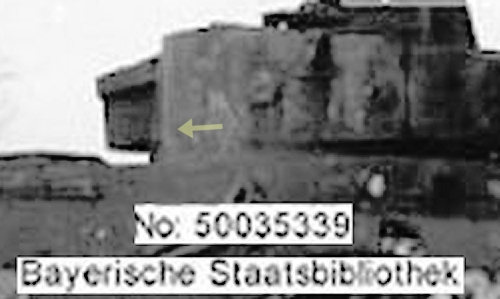 Another piece of supporting evidence is this photograph. Apparently taken at a German test ground, it shows a Tiger(P2) that, upon careful study, can be seen to have a side hatch. It's not clear if this vehicle will become "003" or if it's the other Tiger(P2).

The combat unit that requested a Tiger(P) wanted a Command tank. Two of the existing Tiger(P) were already configured as Command tanks, so we may assume that Tiger "003" was one of them. [2, see see 6-27] But here we have another discrepancy.

A little of the context must be explained. Krupp, maker of the turrets, was designing a Command version of the turret. It would house the FuG.5 radio set, freeing space in the hull for a second radio set. These Command turrets were eventually installed on Henschel Tigers.

The drawings in Panzer Tracts depict "003" with such a Command turret. It can be identified by the antenna post on its roof. But several photographs of Tiger "003" show that it had no such post. Instead we see two antennas on the hull of "003", implying that both radio sets were in the hull. Why did "003" not have a Command turret as expected?

We can guess at the answer if we return to "Panzer Tracts". It states that Krupp never delivered a Command turret to Nibelungwerke, the firm that assembled and completed these tanks. [2, see see 6-26] Instead, Nibelungwerke converted two standard vehicles for the Command role.

It was assumed by the authors of "Panzer Tracts" that this conversion was as per Krupp's design; but it would have been much easier for Nibelungwerke to install both radios in the hull of the vehicle. A full conversion of the turret would involve removal of the MG mount, restructuring of the storage on the walls, replacement of the loader's seat by a radio operator's seat, addition of a radio rack, and more. Parts would be needed from Krupp that were perhaps not yet available; indeed, Krupp's designs for Command turrets may not have been complete by this time.

So, we know that Tiger "003" had two radios in its hull. But that leaves us with no clear idea of where the second radio set was located. Also, we don't know if the tank's standard intercom, the "Bordsprechanlage 20", was replaced by the Command intercom "Bordsprechanlage B". The Panzer III Ausf.K, an existing Command tank with both of its radios in the hull, used that intercom, so it would have been a logical upgrade; but nothing tells us whether Nibelungwerke actually carried it out.

A normal Command Panzer would carry either the FuG.7 or FuG.8 as needed. The diagrams in Panzer Tracts depict a "star" antenna, implying that the FuG.8 is inside the vehicle. But the relevant photograph of "003" shows a mast antenna, appropriate for the FuG.7. Was Tiger "003" capable of carrying both of the long-range radio sets?

The "star" antenna lead of a FuG.8 is more complex and difficult to install than that of a FuG.7. It requires a very well insulated path, and somewhere adjacent to the antenna there must be a tuning coil. Tiger "003" had its second antenna out on the rear engine deck, so this coil could not be in the crew compartment. We can see that it was not housed on the outside of the vehicle. In such cases it would be controlled remotedly by a Bowden cable. The insulating base required by a "star" antenna is also not visible in photos.

Since the FuG.8 is so difficult to add to an existing vehicle, and no evidence of it can be seen here, we should not assume that Tiger "003" was equipped to carry it. The photographic record tells us only that "003" could carry the FuG.7.