The famous Tiger "007" was a Command Tiger. Tiger "S04", well known from a photo session, was also a Command Tiger. These vehicles, issued in small numbers to each Tiger unit, had certain extra features on the outside and contained two radio sets rather than one.

The standard radio set, FuG 5, for communication with other Tigers, was in the turret of the Command Tiger. Therefore its 2 meter antenna belonged on the turret roof.

For the radio set in the hull there were two options. The most common set was the FuG 8, for communication with the Army command. Vehicles carrying this radio set were called Sd.Kfx.267 regardless of the underlying chassis. 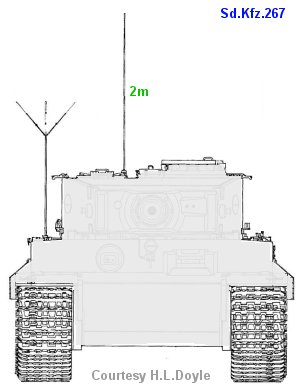 Th Fug 8 had a "star" antenna. It could transmit at 30W and therefore needed extra insulation. As well as the rubber base of a normal antenna, it stood on a ceramic insulator in a metal cylinder. This was countersunk into the hull roof of the Tiger. This diagram shows the standard layout of antennas on Command Tigers with the Fug 8. 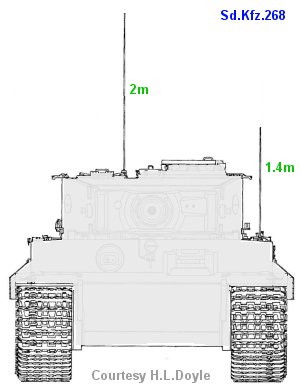 The other option was the FuG 7 radio set, for communication with the Luftwaffe. This was used less often. It required a 1.4 meter rod antenna, and there was a position on the left side of the hull specifically for this. Tanks with this radio set were called Sd.Kfz.268.

Antennas were not always installed. When they were stored away (in tubes on the outside of the tank), there remained a rubber base and a metal stub at each antenna position.

Photographs sometimes show Command Tigers with antennas in the wrong positions. This may be due to the crew not understanding their correct use. But it's also possible that they altered the radio layout inside their Tiger.