The Tiger was originally designed with only 4 crew access hatches in the top plates of the turret and hull. In December 1942 a fifth hatch was added, specifically for use in escaping the vehicle. One of the pistol ports on the rear turret wall was deleted to make room for it. These diagrams show the location of this hatch. 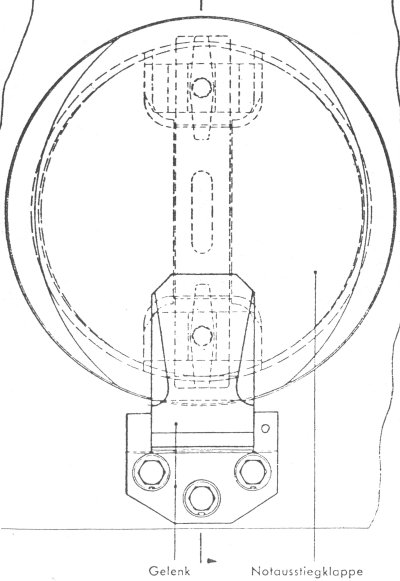 This German diagram shows both the hatch and the opening in the armour, seen from outside. Like every other hole in the 80mm side armour of the turret, the opening was round. The hinge of the door was external.

The hole had a flat profile, and the turret armour was curved. This resulted in a hole that was deep at top and bottom but shallow at the sides. This diagram shows the hole from above.

There was a cutout at the bottom of the hole, to allow the door to open easily without its locking bar catching on the wall. This diagram is looking at the hole from inside the turret. 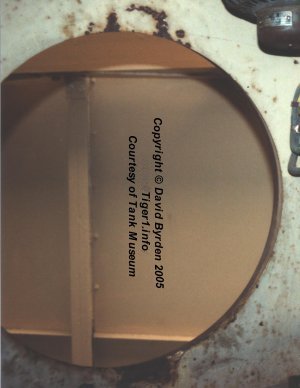 The hole in the Bovington vehicle is shown here. The cutout can be seen at the bottom.

The escape hatch itself was made from a flat, circular armour plate. The left and right sides of its outside were bevelled, as shown in this diagram, to conform approximately to the curve of the turret wall. When the turret was redesigned, the bevels were omitted. The inside of the hatch was narrower than the outside and was tapered, allowing it to fit snugly into the hole. There was a rubber ring embedded in the edge of the hatch to create a waterproof seal.

It was necessary for the hatch to close very firmly, but be capable of immediate release. The designers solved this with a simple mechanism. A steel bar, 80mm wide and 25mm thick, was placed in a shallow vertical slot on the inside face of the hatch. Two U-shaped guides held it at top and bottom, so that it could only slide up and down. It had a slot in the middle, enclosing a peg in the door that limited the motion.

In each U-shaped guide there was a screw with a handle that could be turned to lock the bar. When these screws were opened the bar fell under its own weight, releasing the hatch. If the tank were level, the hatch would simply fall open.

Crews tended to use this hatch for access and for loading ammunition, which was not its purpose. It had no spring in its hinge, so it was very difficult to close. One account describes using a rope to pull it up from inside.