On 20 January 1943, during Operation Eilbote, Kampfgruppe Lüder returned from a fruitless excursion to Spikha, and were obliged to rest at the Hir Moussa junction while their Italian allies caught up with them. They then attacked toward Qusseltia, 20km to the south. 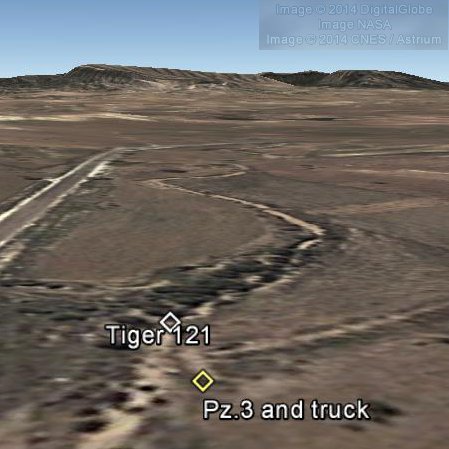 Tiger 121 was apparently guarding the assembly area, since it was placed out front, in a pass between hills 1km south of Ksar Lemsa. It was hidden under a tree, with a Pz.3 provided to guard it. This terrain model, courtesy of Google Earth, shows the approximate location in modern times. Many of the trees in the photos have been cut down, the land is now farmed, and a road has been built, so it's difficult to be sure where the tank stood; but we can see it crossing a bend in the stream.