Introduction of side skirts

The Tiger's tracks were significantly wider than its hull. It required side skirts to prevent mud being thrown up by the tracks.

There were no side skirts on the prototype "V1", nor on the first production Tiger (chassis 250001), nor on the nine Tigers that were issued to s.Pz.Abt.502 at Leningrad in 1942. An unknown number of Tigers were then issued to s.Pz.Abt.501 without side skirts, but skirts were provided later and the unit attached them to the tanks during training in Germany. We don't know when the skirts began to be attached at the factory. 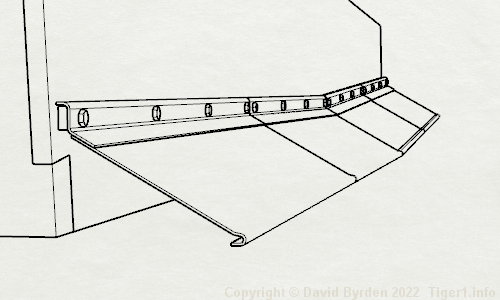 Because the Tiger's hull had the maximum allowed width for rail transport in Europe, the side skirts were made removable. Therefore they were not used for tool storage etc. like the skirting on earlier Panzers. They were also different in that they were slanted, as this drawing shows. Their outer lip was folded. In this drawing, we are looking along the right-hand side of the tank from behind. 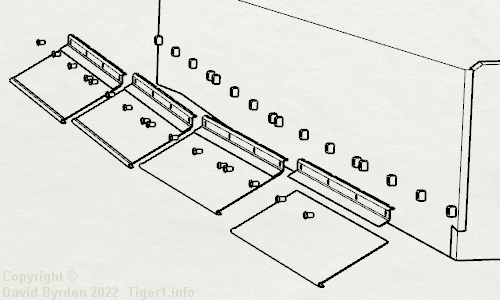 Each skirt comprised 4 segments held in place by 4 bolts. Mounting blocks were welded to the tank's side walls. 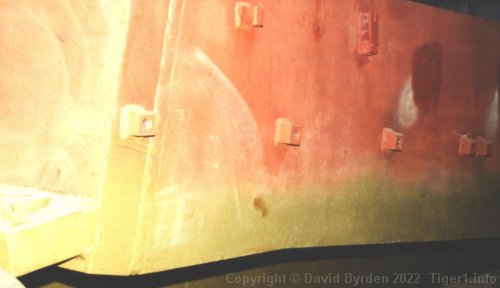 This is Bovington Museum's Tiger "131" with its skirts removed and the blocks visible.

The designer placed these blocks equidistant from the bottom edge of the wall, perhaps to simplify production. But the wall's lower edge had a slight angle at one point, which was copied to the line of blocks. The middle joint had to be near this kink, therefore the segments were made in different sizes, two long and two short. This diagram has the spacings of the mounts. 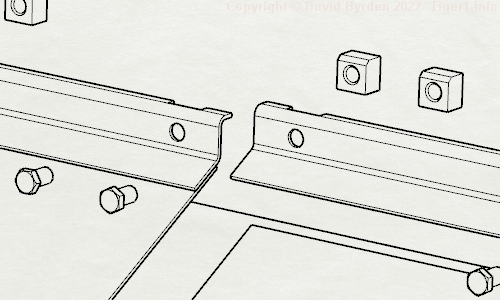 Each skirt segment was made of two parts, a large panel and an angled strip. This is a detail of the parts. 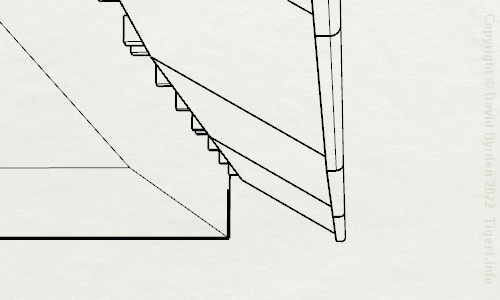 There were no end caps or stiffeners under the skirts. As a result, they tended to get bent downwards as crewmen climbed upon them. The skirts of these initial Tigers rarely form a neat line in photographs of serving tanks. 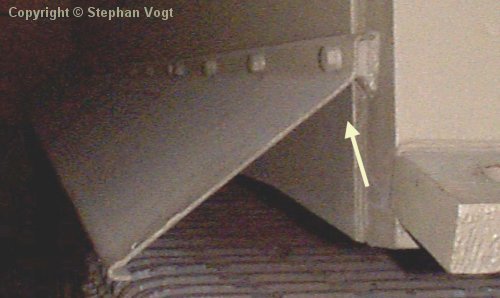 A change was made, very early on, to simplify the skirts by making each segment from a single sheet. This museum photo shows the second type. They are distinguished by not having a visible joint at the indicated level.

Some of these simplified side skirts reached Africa on the last few Tigers of s.Pz.Abt. 501. Many more of them went to the Eastern Front.

In December 1942, a thorough redesign was carried out resulting in improved skirting. All segments of the skirting were now the same length. The welded mounts were put in a straight line (or rather they were intended to be; the factory workers sometimes didn't quite achieve straightness). The welded mounts were moved and now had a uniform spacing but the same overall length.

Each segment now had three stiffening webs underneath it. The stiffeners at the outer ends were larger than the rest, and consequently the skirting had left, right and inner segments. Photos of Tigers in service sometimes show them placed in the wrong positions. The photo shows the underside of a side skirt from Tiger "131" before restoration. It belongs on the right side of a complete skirt, because the stiffener at the right of this photo is the largest one. 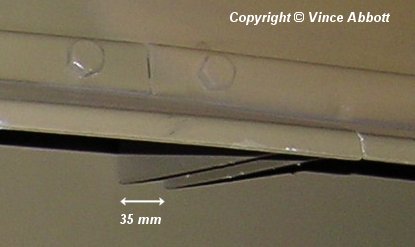 This is where two segments meet.

The width of the skirt is 280mm [1] . Adding to that the thickness of the sheet metal and the vehicle's nominal hull width, we get exactly the figure of 3705mm overall that is stated in [2, see Spielberger page 208] .

This CAD file draws all three types of skirting.