The Tiger 1 had a radio rack suspended from the hull roof above the gearbox. This contained the "Fu 5" radio in the basic version of the tank. The "Fu 5" had separate transmitter and receiver devices. They used vacuum tube technology and both had the same casing which was over 30cm wide. Platoon leaders' Tigers were usually given a second radio, the "Fu 2", which was simply another receiver of the same type. I will not describe "Command" Tigers here. 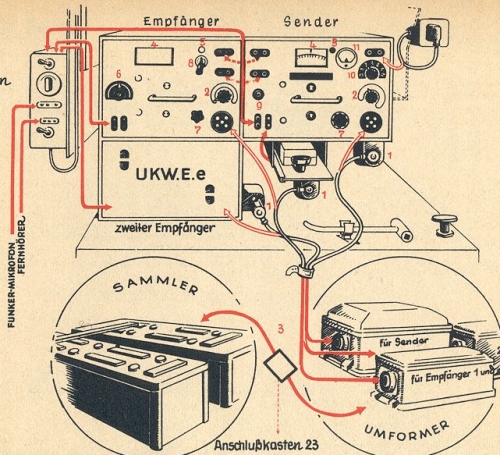 This diagram, from the Tigerfibel, shows the layout of these radio devices and the equipment that is connected to them. This is what the radio operator sees to his left. The three radio devices are in their rack, with the "Fu 5" in the upper portion, receiver on the left and transmitter on the right. A Morse code key is in a drawer under the transmitter. The optional "Fu 2" is present in the lower part of the rack, but has its front cover attached. The power transformers and the tank's main battery are drawn below but they are elsewhere in the Tiger. The power cables are not plugged into the radios here, but into null sockets for safe storage.

At the left of the diagram there is a small box, the "Kasten Panzer 20". It contains just about all of the Tiger's intercom system. The radios are linked to the intercom. 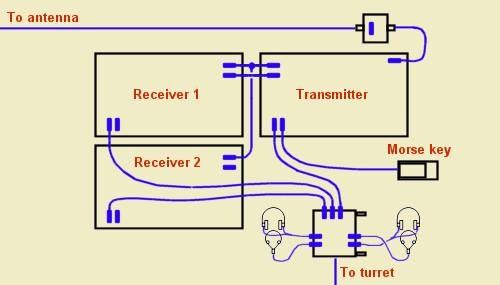 This diagram shows the typical cable connections between the radio devices, the intercom box and the antenna adapter. The headsets of the two crewmen in the front hull are directly connected to the "Kasten 20".