The Tunisian Tiger had smoke launchers on its turret, three on each side. They were fixed to heavy metal brackets. In the Rye Field kit, this feature has three problems. 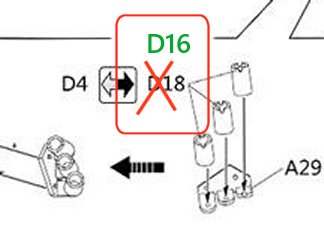 The instructions offer you a choice of two smoke launchers; loaded for action or empty. But they quote a wrong part number. Part D18 is an S-mine device and is not relevant to this kit. Part D16 represents the empty smoke launcher.

The supporting brackets for the launchers are also misnumbered in the instructions; they are on the B sprue, not the A sprue.

But the brackets (parts B49 and B50) have another, more serious problem; they are significantly shorter than the real ones. These two photos contrast the model's bracket with the same part on a real Tiger. Notice that the bottom of the real bracket is almost level with the slot in the vision port.

As a consequence of the undersized bracket, the smoke launcher base plate is undersize.