The Rye Field Model Tiger kit includes metal and plastic parts to build the towing cables of the Tiger model. These were stored on the vehicle's top deck. 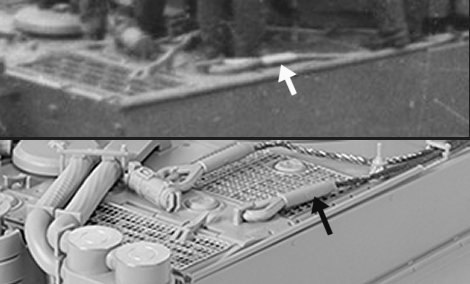 However, when we compare the cable on a real Tiger to that on the model, it is obvious that the model's cable is out of scale. The Tiger in the top photo is actually number "141", the same one depicted on the model's artwork.

The reason for the discrepancy is that the Tiger had two cable sizes. It was originally equipped with a 22mm diameter cable, stored on the deck with both ends on the engine hatch. The 18th and all subsequent Tigers were given a stronger 32mm diameter cable. The eyelets and sleeve at the ends of this cable were significantly larger. Since the new cable did not bend easily, the storage brackets had to be moved, and so the thick cable was stored with its ends at the front of the vehicle.

Rye Field's model includes an accurate representation of the thick cable, but the storage brackets in the model are the ones used with the thin cable.