The turret designed for the VK4501 (P) had two pistol ports at the rear [2] , and this feature was carried over to the Tiger 1. The ports were located at exactly the 45 degree points on the circular turret rear [3] . In later vehicles the right-hand port was eliminated [2] . Then, when the turret design changed, a new kind of port replaced this.

These ports were of a much stronger design than previous German pistol ports. A fixed steel disc was embedded in the turret wall, held in place by six bolts. These had cone heads, to reduce the chance of a direct hit punching them through the wall.

The disc had a hole on one side. It was always installed with the hole to the left, as seen from outside. (Tiger 100 of S.Pz.Abt. 501 was photographed after capture with a pistol port in the other orientation. Since there was a bolt missing, it was most probably disassembled by the Russians and replaced wrongly.)

On the inside of the turret wall was another, smaller steel disc. This had a handle and could rotate through 180 degrees [4] . 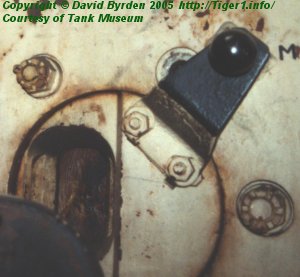 This is the example in the Bovington vehicle, in 1990, with its original ivory and black paint. There is a half-century worth of dust, one of the bolts is missing, but the port worked perfectly. Notice that its oil has seeped out and discoloured the paint. 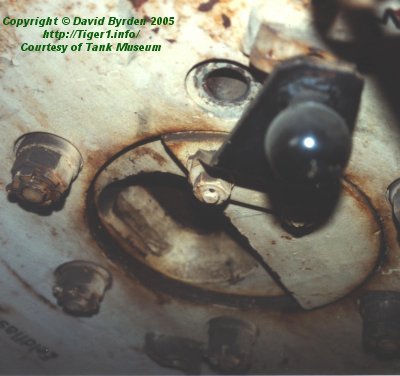 The rotation was limited by stoppers welded to the turret wall.

The knob on the handle was the top of a spring-loaded plunger that would lock into the holes in these stoppers. This locked the disc in place. The knob had to be pulled to allow another rotation [1] .

The inner disc had a hole that would align with the outer hole if it was rotated to one extreme.

This sectional diagram shows how the holes lined up and the size of the opening. A pistol of width 35mm would have a field of fire of 30 degrees to each side. Notice the rubber seal, part of the waterproofing of the tank.