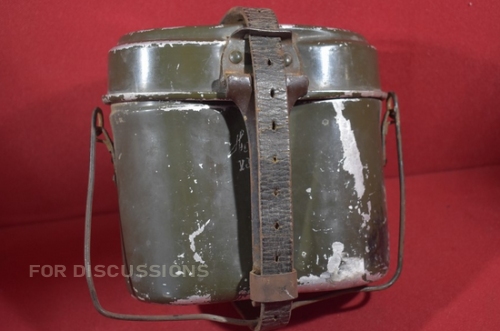 German troops were issued a standard mess tin. This applied to Panzer crew as well. The tin was 15cm tall and stored cutlery. There were slightly different versions used throughout the century by several nations.

The book "DW to Tiger 1" quotes the April 1942 review of the first complete Tiger 1 turret [1, see 3.4.2] . The feedback is a list of changes to the turret, but it contains one item referencing the hull. It says that "all 5 sets of cooking utensils" should be stored in the hull. We can infer that this first turret, and perhaps the original Tiger (P) turrets, had storage for 5 mess tins. 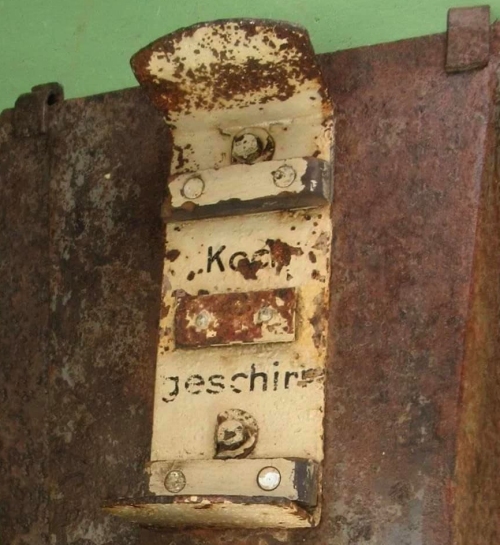 This is a German clip for holding one mess tin. It comes from some other vehicle but is a standard design used in the Tiger. Although bent and rusted, this one retains some of its "Ivory" paint and the label "Koch geschirr". The central bar had a belt attached to it for fixing the mess tin in place. The thick bars above and below are wooden protectors. 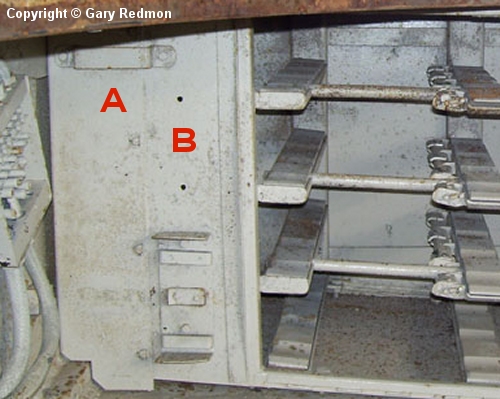 Information about the insides of the first Tigers is hard to find. But we have the surviving Tiger "712", the 31st Tiger, and inside it we find one of these mess tin holders at the forward right-hand corner of the fighting compartment. There are holes at [B] for affixing another one. The remaining ones were at the front left-hand corner and the middle left side. All of them were attached to blank panels on the ammunition bins.

But, in this particular Tiger, we're not sure whether the upper holder was stolen, like so many parts of Tiger "712", or was never there at all. There is a clip at [A] for an MG ammunition pouch, which really does not leave enough space for a mess tin. The designers may have added this clip early on in the Tiger's history, and they may have moved the upper mess tin to make room. Tiger "712"'s ammunition bin may have already been built, drilled with holes that were no longer needed. 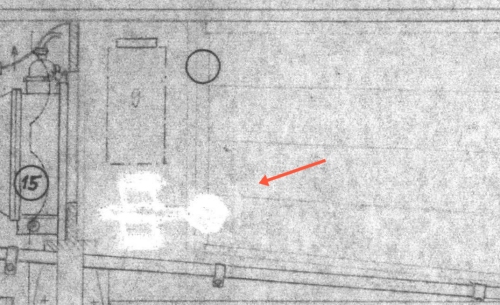 As evidence, I present this extract from a design drawing of the Befehlstiger. Dated November 1942, it originally showed the MG ammunition bag centered on the panel, with a single mess tin holder (arrowed) below it. Compare to Tiger "712". The same drawing shows two mess tins in the forward left corner, and two in the middle left side. (We cannot compare those positiions to Tiger 712 because its left-hand ammunition bins were discarded when its side was cut off.)

Whatever may have happened, the mess tin holders were soon eliminated from the Tiger's design and the crew were obliged to store their tins wherever they could. All five of the mess tin diagrams were scratched off the Befehlstiger drawing. They are the only item crossed off its manifest (arrowed here). The line says that Item 41 is a "Halter für Kochgeschirr" and it references the drawing number for that holder. 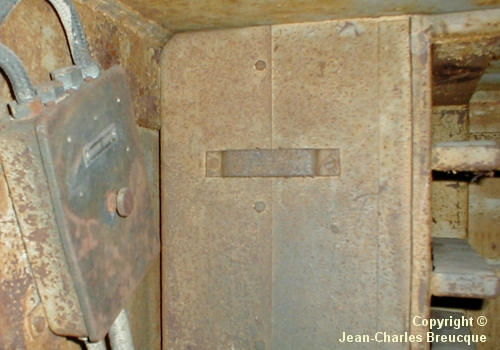 For the remainder of the Tiger's history, there was always an MG pouch clip, and nothing else, where that 1942 diagram showed one. The other panels where mess tins had once been, remained blank.