The "Bergepanzer Tiger" was equipped with a full set of Feifel gear when it was built. This equipment was still standard for Tigers, although it was dropped before the last "Mid" Tigers were made.

The 508 battalion received several Tigers with Feifel equipment, including the one that eventually became a "Bergepanzer". Because they were operating in northern Italy, they did not need the filters.

This photo shows a Tiger of s.Pz.Abt.508 that is equipped for Feifels. The air filters are not attached at the hull rear, but the V-shaped duct is present on the engine hatch. The flexible air tubes are not present.

The Dragon kit "Bergepanzer Tiger" does not contain an air duct, nor does it contain a suitable engine hatch with brackets for the air tubes. 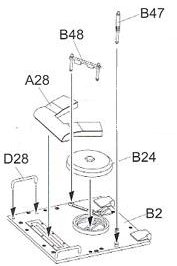 The Rye Field Models kit "Bergepanzer Tiger" does not mention them in the instructions, but it contains all of the necessary parts. This is how to assemble them.