Although the Tiger(P) turret looks very much like the Tiger(H) turret, there was a significant shape difference at first. It had a lower turret roof, with a raised ridge in the middle. And, because the roof was lower down, the vision ports in the sides of the turret were also lower down than what we're used to.

The final two turrets made for the Tiger (P) had a higher roof made from a single steel plate. The side walls were visibly taller than those of the original turrets. But, the vision port was not moved upwards to take advantage of the extra space. That change was made on the Tiger(H), but the two tanks were following separate lines of development by that time, and that change was not copied to the Tiger (P). 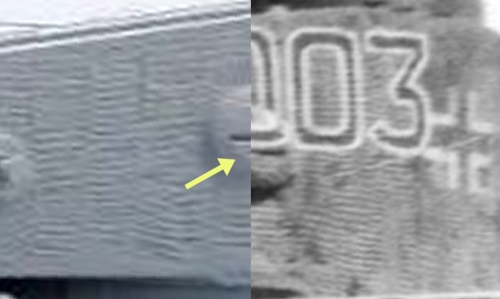 Amusing Hobby have apparently assumed the Tiger(P) turret to be the same as a Tiger(H) turret. That is not true in every respect, despite their common origins. Here, I compare Amusing Hobby's kit (on the left) with the real Tiger(P) number "003" (on the right). The real tank has its vision port lower down than Amusing Hobby's one.