The Airfix "Early Version" kit includes a standard Tiger turret bin. But it is the wrong bin for the decals, which represent Tiger "832".

The real "832" had a wider turret bin than what the kit provides. It was so wide that notches were cut on both sides of it, to prevent it colliding with the hatch and the pistol port. It also had two bolted support arms on each side. 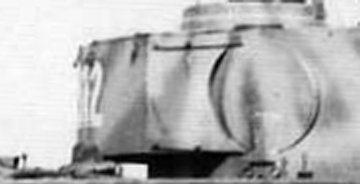 All of the original "Das Reich" Tigers had these wide bins. This photo shows one example.