The Tiger's cupola was provided with an umbrella, to keep the commander dry when the hatch was open. It was introduced in November 1942 [1, see 3.4.2.5] .

Photographs of the umbrella in use are rare. This is probably because a support arm was also added to the cupola design, to hold the hatch almost vertical when open. The umbrella could no longer be used when the hatch was open. 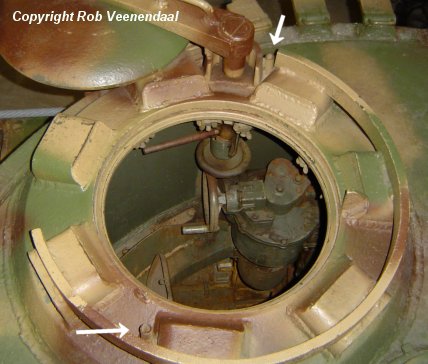 When the turret was redesigned the umbrella was unchanged; but the two supporting tubes were moved to new positions on the new cupola, as shown above. The new hatch opened to the side on a vertical hinge; in its new position, the umbrella no longer collided with the hatch.