The Tiger E was fitted with several slightly different hatches over the loader's position. Some of the version differences were improvements made over time, and some were due to different manufacturers making the part in different ways.

This kit contains different optional versions of the loader's hatch. Unfortunately one version is not appropriate for the Tiger E at all. It is the hatch from the Tiger B, which had the same dimensions as the Tiger E hatch, but there is no evidence that it was ever installed on a Tiger E. 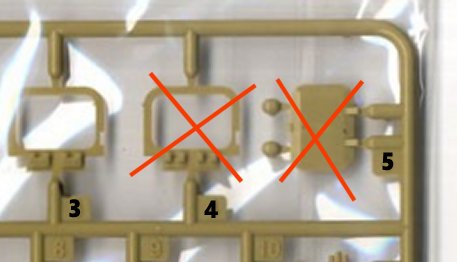 These two parts, P4 and P5, comprise the incorrect hatch. They should not be used on a Tiger E.