In the first Tiger tanks, the driver had a scope to use when his visor was closed. It was attached under the roof beside him. On the outside of the tank, the scope had two small holes above the driver's visor.

After about 100 Tigers were built, this "Kff2" scope was dropped from the design. A small number of Tigers in the factory were already prepared for it; so their eye holes were simply blocked up with weld. These Tigers also had a small metal plate under the roof, where the scope was going to be attached. The Bovington Tiger "131" is one of these vehicles.

Rye Field's first Tiger interior was copied from the Bovington Tiger. They modelled the base plate on the roof. It's marked in this photo. But they didn't provide the Kff2 scope to attach there. The scope should be present in their "Tunisian Tiger" and "East Front Tiger" but is missing. 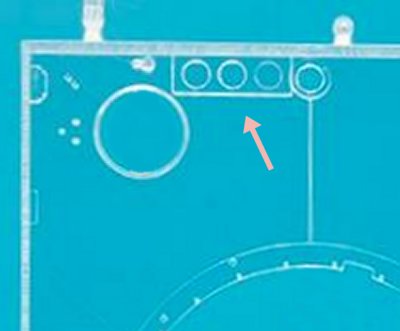 Later they tooled additional roofs for Mid, Late and Early Tigers, including a transparent roof (shown here). They copied the base plate to all of these new parts. But this is an error. None of these Tigers had the base plate.