Because German tanks were made of ferrous materials, magnetic compasses could not be used within them. In fact, crew were advised to stand 20m from their vehicles when using a magnetic compass [2] .

Larger tanks were therefore provided with a gyrocompass. It contained a gyroscope driven by an electric motor, powered by the tank' s main battery. (Gyroscopes are spinning wheels whose axes retain their absolute orientation in space unless forced.) 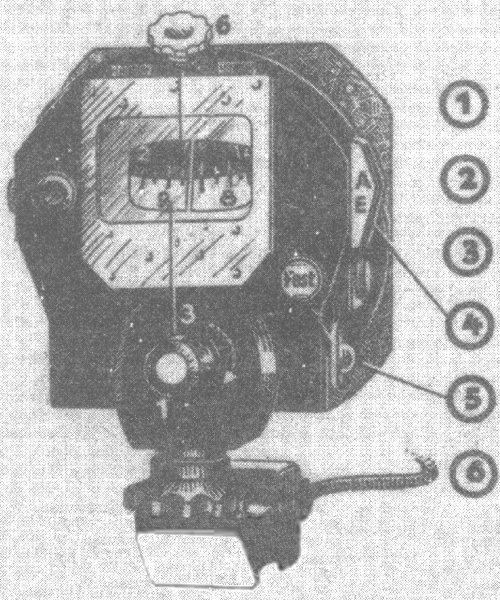 This diagram, taken from the Pantherfibel [2] , shows a WW2 German gyrocompass. I believe the round item to the left of the main window is a red power-indicator light. The power connector with its cable can be unscrewed from the bottom of the gyrocompass; its thumbwheel is visible here.

In the main window we can see two dials. Both of them are horizontal rings, numbered as 12-hour clocks. The upper dial ( 'Befehlsrose' or 'master dial' ) can be adjusted at any time using the wheel marked (6). It is used as a memory of what the vehicle's direction should be. The lower dial ( 'Folgenrose' or 'slave dial' ) is attached to the gyroscope and therefore it does not turn relative to the ground. It shows what the vehicle's direction really is. The driver can steer in the desired direction by keeping the slave dial aligned with the master [2] .

If the gyroscope lost its alignment relative to the ground (for example, if the tank was moved while the gyroscope was locked) then the slave dial would need to be realigned. This was done while the tank was parked and the gyroscope was locked. The driver would push the switch on the right-hand side to the 'A' position ( 'ausrichten' or 'adjust' ) to disconnect the slave dial from the gyroscope. It was then possible to adjust the slave dial using the knob marked (3) . An absolute bearing would be obtained, usually from a magnetic compass. The slave dial could be set to any convenient orientation; for example, '12' might point to the enemy rather than to the north. (I would guess that all the tanks in a unit would align their dials the same way.) Finally the driver would push the switch to the 'E' position ( 'einschalten' or 'engage' ) [2] .

[1] Survey of gyrocompass at Bovington Museum, by Andrew Harris

[2] Pantherfibel (user's guide for the Panther)